now let’s get into
the No Way Home Trailer Breakdown.
Ok so the first trailer for the movie very
much tackled the first part of the film. It
pretty much showed the ramification of Peter’s
name being revealed, how it changed his life, 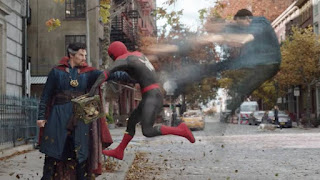 his attempt to change things with the help
of Doctor Strange and how this ultimately
backfired and brought across several characters
from across the multiverse.
Now as for this trailer it leans heavily into
the villains, gives some of their motivations
and character beats and it also reveals their
incredible costumes before ending on a big tease.
However we start off with shots just before
the memory eraser spell and these include
ones that were shown in the first trailer,
namely the public enemy number one. This imagery
of a face of half peter half spider-man has
been used several times in order to display
his spider-sense and it was also shown on
the front cover of the daily bugle when reporting
the reveal.
Peter also says that he’s only had one week
where his life felt normal since he got bit
by the radioactive spider and this is when
MJ found out. I think the movie is very much
gonna tackle MJ also forgetting his identity
too and he’ll have to decide whether to bring
her back into it or not.
We see that he’s clearly put her in danger
as she not only comes off the bridge with
him which is something that we know she hates
doing but they also swing through the subway.
Now we see Strange saying that the MCU got
some visitors when Peter botched the spell
but it was on you bro. You botched the spell mate.

Intercut with this are images of the pumpkin bomb before we we’re introduced to
our first big bad.
This is the Green Goblin who’s back in his
classic costume from the first Spider-man
movie. 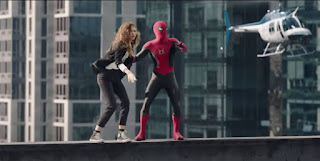 Now we get a good look at the Green Goblin
who will be reprised once more by Willem Dafoe.
I always thought that it kinda sucked that
the Raimi movies killed off so many of the
villains as it would’ve been brilliant to
see Osborn appear throughout the entire trilogy.
I know that Harry hallucinated seeing him
in the other films but because of the impact
he left on the first movie it just felt like
something was missing. Though everyone loves
Doc Ock, for me Dafoe is the biggest villain
for the film and from what I’ve heard he’s
gonna be the main bad guy in it. There’s a
lot of leaks going around on the movie and
from what I’ve been told his costume will
go through several changes in it. Firstly
when the villains arrive he’ll be in his classic

one from the Raimi verse. This will get damaged
and he’ll end up losing the helmet. From this
point out he’ll lie low and pretend to be
a homeless person and he’ll wear a pancho….is
it a pancho. Anyway he’ll then travel to FEAST
which as we know from Far From Home, is run
by Aunt May. Here he’ll encounter Peter and
he’ll tell him about the villains dying if
they go home which will set off a chain of
events that leads to Peter freeing them. I’ll
talk about this more later on in the plot
leaks part of the video but Goblin will also
get drones and he’ll wear goggles for his
final look which I’m sure you’ve seen if you’ve
been following the channel. Which you bloody
should have.

Now as for the Black Suit, it’s been confirmed
now that this will actually just be the Red
and Black suit turned inside out. If you saw
some of the shots from the leaked alternate
trailer you’ll have known for a while now
that this happens because Peter gets green
paint thrown over him by a mysterio supporter.
Now yesterday Big Screen Leaks revealed that
the magic webs we’ve seen in the toys and
so on will actually be given by Strange to
Peter and these will have the power to send
the villains back to the prison below the
sanctorum. That’s a really good idea and it
makes sense as to why he’d use these.
It’s also possibly that he keeps some of the
Nanotech and this is how he makes the integrated
suit which looks like a cross between the
black one and the Iron Spider.
From this point we get some extended looks
at the bridge scene namely Ock fighting Peter
after he likely just jumped off the car that
he suited up on.
This is an awesome action scene and Peter
even uses double webs to swing under a car
as he avoids being hit by the metallic arms.
Now Doc Ock was heavily revealed in the first
trailer and he was pretty much the thing they
closed out on to blow everyone’s mind.
This actually took place at the hudson river
which is where the character was killed in
the Raimi movie.

Though he seemed like quite a threatening
presence at the time, it seems like he’s actually
trying to reason with Peter in this one which
makes me think he’s not a malevolent force.
If you pay close attention to the differences
between this new look and the last one you
might also notice that the villains tentacles
have changed slightly. This was shown in the
Empire Magazine photo images and we watched
as they went from their normal look when he
was squeezing Peter’s head to having red and
gold laced throughout them. I actually have
a theory that when Doc Ock holds Peter in
the air that the tentacles absorb the nano
tech in his suit and that this is then taken
over by the tentacle AI. This would also explain
why Peter doesn’t really seem to use the integrated
suit that much beyond the Bridge scene and
if you look at the trailer and images he’s
kinda swapping between the Red and Black and
Black one. So I think that it will be absorbed
into Ocks tentacles and he’ll then go back
to his other version.
He also unmasks Peter in the trailer and is
confused as to why he’s not the Tobey Maguire
version. When the first trailer released a
lot of people theorised that the person he
was saying Hello Peter too was actually Tobey
but I think this confirms that it was indeed
just Hollands version.

Strange and Peter manage to capture
them and they put them in a prison below the
sanctum sanctorum. Strange wants to send them
back to their home worlds but he has to figure
out where they are first and how to do this.
Click here to download
👇👇👇👇👇👇

Norman visits them and they all recall their
death which Spider-man was present at. Osborn
realises that he needs the villains in order
to carry out his plan but strange’s magic
is too strong so he goes to Peter in the guise
of an ally.
He says that because they all died on their
worlds that sending them back would be a death
sentence and he blames the Peter of their
universes for their deaths.
Peter knows what it’s like to be wiped from
existence because of the snap and he doesn’t
want to put anyone through that.
This guilts Peter into stealing a magical
cube from Strange that frees the villains
and allows them to escape.
This is where Strange chases Peter through
the mirror dimension and we see New York collapsing
around them.
Strange finally captures him but it’s too
late and thus they’ve gotta stop Osborn before
he carries out his plan. Now I have heard
that the villains in the movie, namely the
ones who turned good actually now have a chip
in their head that controls them to some extent.
This may be developed from the AI tech in
Docs Tentacles but that’s just me guessing.
Sandman doesn’t have this because he’s basically
Sand and this is why we see him helping Peter.
There’s some big blow out battles and Osborn
ends up creating a giant arc reactor that
he positions over the statue of liberty. This
has a Captain America shield on it and it
makes for an amazing set piece. Unfortunately
from what I’ve heard, Aunt May dies during
the movie and we close out with the movie
feeling very tragic.
From what I’ve heard the post credits scene
contains Tom Hardy’s Venom and then as we
head into his third film, that will kinda
be where Let There be carnage picks up from.
Now apparently there have been multiple endings
filmed similar to Endgame and this is to stop
the spectacular spoiler-man himself Tom Holland
from letting things slip.